Hands on drills drawing from your holster, concealment, and shooting are the highlights of this class. We will go over Illinois State law regarding the use of force, developing a personal and home protection plan for you and your family, firearm basics, shooting fundamentals and many other eye opening topics. The class concludes with a trip to the range for live fire drills and the State qualification course. 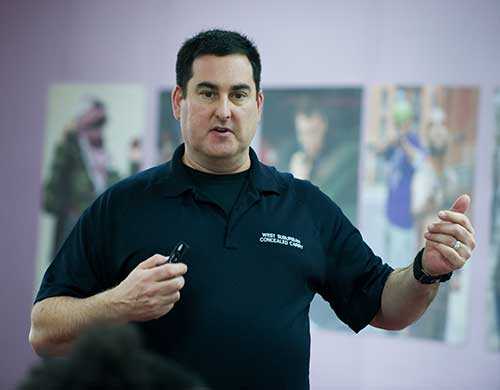 Joe Motto has been a Police Officer in Western Suburbs of Chicago for over 25 years.

During this time, he served a 10 year assignment on the State of Illinois Regional SWAT and Anti Terrorism Team which responded to critical incidents throughout the State of Illinois.  He currently serves as the Lead Firearms Training Officer and Range Master for his Police Department.

He is a certified Firearms Instructor through the National Rifle Association (NRA) as well as the Illinois Law Enforcement Training and Standards Board which allows him to instruct and certify both Law Enforcement Officers and civilians.  He is approved by the State of Illinois as an Illinois Concealed Carry Instructor.  Through North East Multi-Regional Training (NEMRT), he is a Rifle/Carbine Instructor, Legal Use of Force Instructor, and an Advanced Active Shooter Instructor.

His extensive training and instructor status earned him the 9th recorded certification in 2014 by the state of Illinois New Master Tactical Patrol Officer Instructor program.  While on his assignment on SWAT, his training included: advanced hostage rescue, barricaded subjects, bus, train assaults, close quarter combat, and advanced pistol and rifle marksmanship.  During those 10 years, he responded to over 200 critical incidents in the State of Illinois.

He currently spends his spare time on the range with his 14 year old son who has the vision of becoming a competitive shooter when he grows up.